Red Sox Fans are Not Terrorists 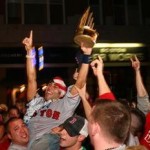 The New York Times published an article today about the government’s use of the “material support bar” in immigration proceedings. The so-called material support bar is worth discussing in depth to understand how broad the statutes defining terrorism really are.

A.  “Terrorist Organization” is Defined to Include Red Sox Fans

A terrorist organization is defined as “two or more individuals, whether organized or not” that have or plan to engage in a range of violent activities, including, but not limited to the use of an “explosive, firearm, or other weapon or dangerous device (other than for mere personal monetary gain), with intent to endanger, directly or indirectly, the safety of one or more individuals or to cause substantial damage to property.” Under this definition, two people who engage in any type of violence against people or property are the legal equivalent of al-Qaeda so long as they are motivated by something more than just financial gain. Red Sox fans celebrating a world series victory throw a garbage can through a store window? Yup, terrorists. A few guys get into a bar brawl over a spilled drink and a chair gets used as a weapon? Yup, terrorists. Several California police officers severely beat a man with their batons whom they mistakenly thought was a drug dealer? Yup terrorists. None of these activities are condonable; they are all illegal and should be punished. But they certainly do not constitute terrorism.

B.  “Material Support” is Defined to Include the President of the United States, Congress, and Every American Taxpayer

The statutes do not only exclude members of the broadly defined “terrorist organization” from getting legal status in the U.S.  Those who have provided “material support” to a terrorist organization are treated the same as the members of the organization.   “Material support” includes committing “an act that the actor knows, or reasonably should know,” will result in providing, among other things, “housing,  transportation, communications, funds, transfer of funds or other material financial benefit, false documentation or identification,” to a terrorist organization or  “to any individual who the actor knows, or reasonably should know, has committed or plans to commit a terrorist activity.”  In other words, providing any kind of money, food, or shelter to any person who has or plans to commit a crime using a weapon, constitutes material support, so long as the purpose of the crime is something other than pure personal profit.   It doesn’t even matter if the support provided furthers the crime.   Rent a car to those Red Sox fans?  Material support.   Give medical care to the bleeding bar brawlers?  Material support.  Provide on the job training to the California police?  Material support.

Importantly the statute does not provide exceptions that are commonly found in similar laws.  For example, people who have provided support to organizations that are funded by the U.S. are not exempted from the statute.  People who have provided support under duress (i.e., slave laborers) are not exempted from the statute.  So under the technical definition, because U.S. taxpayers have provided financial aid, weapons, weapons training, and countless other means of support to organizations and governments around the world that would easily meet the definition of terrorist organizations, every U.S. taxpayer could fall within the confines to the statute.

C.  But surely you are being hyperbolic – Our government would never assert the bar except in genuine cases of terrorist related activity!

I wish I was being hyperbolic, but unfortunately, DHS is actively asserting the material support bar in cases where it clearly should not be raised.  Thousands, yes, thousands of refugees who worked for U.S. backed and funded organizations overseas have been denied status – or their cases placed on hold – because of the material support bar.  Our firm is currently representing several individuals who are in this predicament.  The following is the true story of two of our clients:

Our clients, the “M brothers” grew up in war-torn northern Sri Lanka.  As teenagers, their father was beaten and kidnapped in front of them by a Sri Lankan government backed organization.  Two days later, the same organization kidnapped the M brothers and turned them into slave laborers.  Over the course of several days, they were tortured and forced to work digging ditches.  Eventually, they were able to escape, and made their way to the U.S. where they applied for political asylum.  In several hours of extremely difficult testimony, they described the horrific physical and psychological torture carried out on them by this organization.  After their testimony, the lawyer for DHS argued that because the M brothers dug ditches, at gunpoint, they provided material support to a terrorist organization (even though the organization was an official part of the Sri Lankan government, which received over $20 million in funding during the year of the relevant events).  It has been two-years since the M brothers have testified, and there is still no decision on their case.  Once the word terrorism was used, their case became submerged in a politically bureaucratic morass that shows no signs of loosening.

DHS has interpreted and implemented Congress’ words in the broadest possible fashion.  Its legal position, however, is untenable.  In enacting the material support bar, Congress’s intent was to deny relief to persons who made a moral choice to assist those who have engaged in terrorist activity. A rational reading of the statute should include an implied exception, at the very least, for those who acted under duress or who did not possess the requisite intent that would be required to attach personal culpability.

No rational law or public policy can justify denying relief to a victim of a terrorist organization, as is the case of the M brothers.  DHS’ efforts to apply the “material support” bar to genuine victims of terrorists ignores the intent of the statute, wastes government resources, and delegitimizes its efforts to exclude actual terrorists and those who pose a legitimate threat to the United States.  Hopefully, rationality will prevail at some point.  But given the politicization of terrorism in the public discourse, I fear that it will be years, if ever, that we will see such rational thinking.