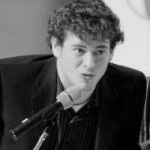 Lucas Caress graduated from the Fiorello H. LaGuardia High School for Performing Arts in 2005 where he studied theater and from the University of Vermont in 2009 with a degree in political science. Lucas has traveled the world as an accomplished debater. He was a national semi-finalist in the U.S. National Debates, won Top Speaker at the Global Youth Debate Conclave in Bangalore, India, and was also a finalist at the International Debate Academy in Maribor, Slovenia and the World Invitationals in Kuala Lumpur. As a result of his debate accomplishments, Lucas was a guest of honor at the U.S. Embassy in Thailand in 2009.

Lucas hopes one day to circumnavigate the Earth on a ship called “Lady’s Slipper.” As a New York Metropolitans fan he must be an eternal optimist. While he does not mind the existence of power, he would like to see less of it in the world.